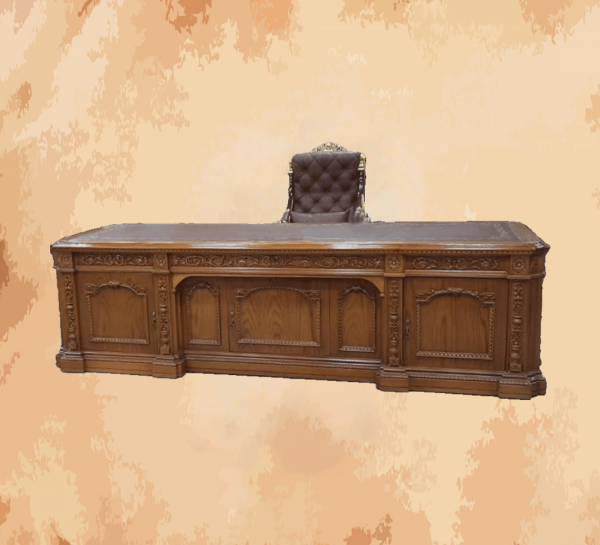 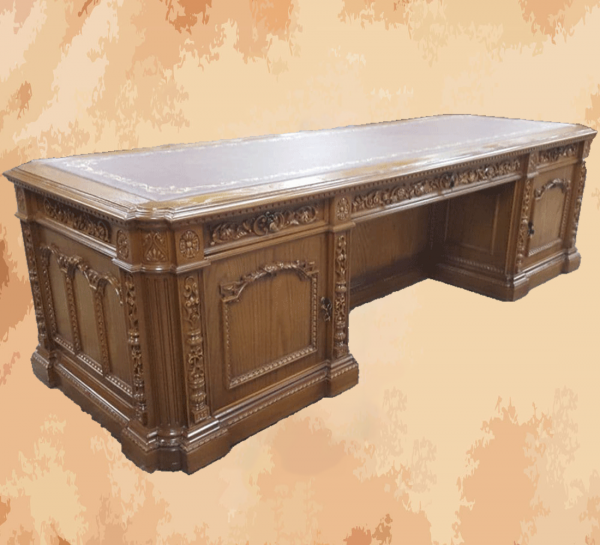 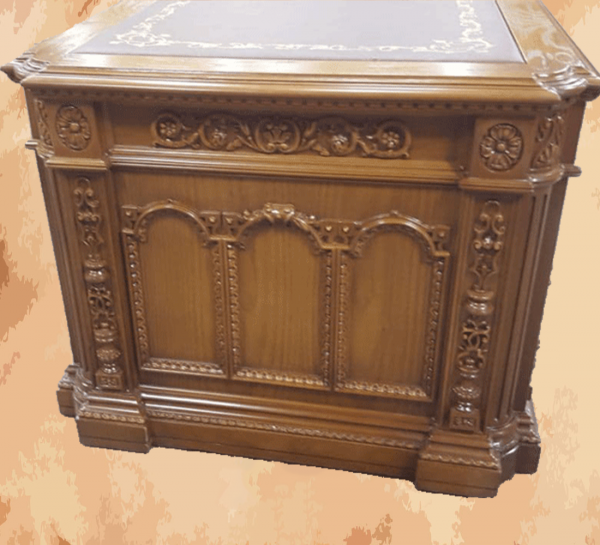 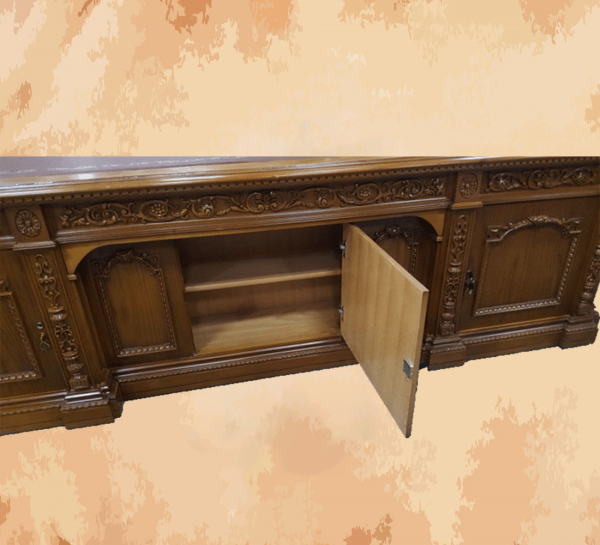 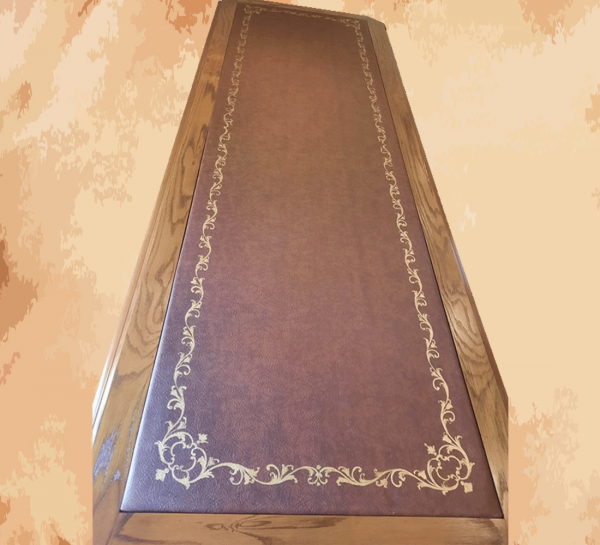 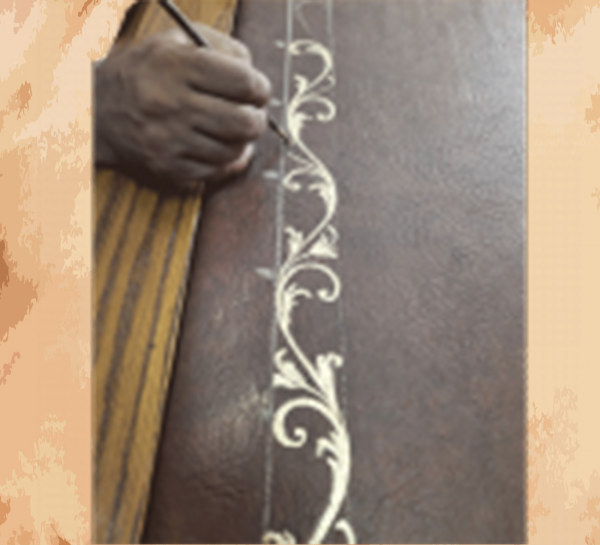 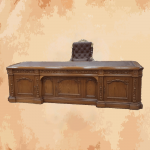 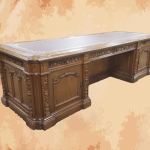 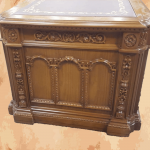 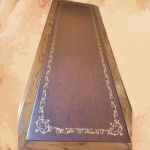 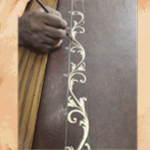 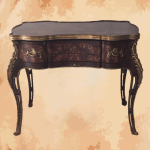 (Mechanical table) Jean-François Oeben
0 out of 5
( There are no reviews yet. )

Office inspired by the White House office with some modifications according to the client’s desire with natural wood and environmentally friendly paints and this is information about the original office
Long history.. What you do not know about the wooden office of American presidents inside the White House!

Its origins are British: The wooden desk for the President of the United States was not made within the American borders. It was originally one of the pieces in one of the ships of the British Royal Fleet, specifically a ship called (Her Majesty), which weighs nearly 600 tons, which was sent by Queen Victoria on a rescue mission at the pole North in 1852 to find the lost Franklin expedition that disappeared in 1848 while drilling in the Arctic. After the ice multiplied on the ship in a way that paralyzed its movement and damaged it in the middle of the ocean, it was discovered by James Buddington, the captain of one of the American whaling ships in 1854, and he returned to American soil with her crew without any problems or injuries.

Reward for kindness! After the departure of the ship (Her Majesty) of the British Royal Fleet from service in 1879, the Queen ordered the most skilled carpenters to use the ship’s wood to make a luxurious wooden desk that is carved by hand, showing drawings executed from wood of a man and a woman holding hands to symbolize the expression of good relations and good intentions between The Queen and the President of the United States of America. The office was sent to the United States at this time during the reign of its 19th president, Rutherford Hayes in 1880, who admired the splendor of the ornate wooden office design to place it inside his office inside the White House.

Modification of the desk: Although there have been no modifications made to the office of US presidents, US President Franklin Roosevelt is the only one who added wooden panels in the middle of it, which open and close to hide his legs, as he was suffering from polio

His wooden panels depict history: Roosevelt’s secret door, which was added to conceal his feet, was embroidered with a presidential seal carved of an eagle facing arrows, a sign of war and power.

Back again to life! : The wooden “Resolute” desk was neglected and forgotten for many years, as it was placed in the White House closet before returning again during the term of President John F. Kennedy in 1961, at the desire of his wife, First Lady Jackie Kennedy, to become the most important office inside the White House again after a period of storage inside stores.

Family Photo Capture: The children of Caroline, John Jr., and Kerry Kennedy President Kennedy were photographed playing in the underside of the Presidential Office in 1962, becoming one of the most famous historical photographs ever taken of the office of the President of the United States of America. Caroline, John Jr., and Kerry Kennedy are often seen playing in The secret room that was designed to hide the feet of former President Roosevelt while John F. Kennedy, then President of the United States at the time, was doing his job.

Back again: US President Jimmy Carter demanded that the Presidential Office of the Resolute “return to the Oval Office inside the White House, and the main office of Ronald Reagan, Bill Clinton, George W. Bush and Barack Obama was

George HW Bush: President George HW Bush did not use the “Resolute” desk to return to the White House warehouses again. Bush Sr preferred to use a plain, unadorned walnut desk he called “C + O Desk” and it was one of the pieces of furniture that existed inside Ohio Company Railroad in 1920 before the company later awarded it to the White House.

Engraving in ink: Just as the rioters do on study desks, Dick Cheney, Vice President under George W. Bush, inscribed his name on one of the top drawers of the Presidential “Resolute” office before leaving office.

Obama’s feet: During his presidency, Obama raised a lot of reservations because of the pictures in which he appeared to put his feet on the presidential “Resolute” office, and the great historical value it contains for Americans. These pictures caused a lot of press criticism of the former American president.

Not the only office: In fact, the British Queen did not gift only one wooden desk, but there were 3 offices, where the second office was much smaller compared to the first office and was placed in the Royal Naval Museum since the eighties, while the third office was known as “Queen Victoria’s Office” or “Office of Queen Victoria” or “Office of Queen Victoria” Grinnell, a ladies’ office for ladies, was a gift from the Queen to the widow of Henry Grinnell in recognition of his efforts in researching the Franklin expedition.

There are no secret rooms: Like what happened in the famous American movie “National Treasure,” starring veteran actor Nicholas Cage, many think that the presidential office contains secret buttons that open hidden doors inside the Oval Office, but unfortunately there are no such things in reality and there are no Secret doors behind the paintings hanging on the walls inside the White Office

There are no reviews yet.

Be the first to review “White house office” Cancel reply